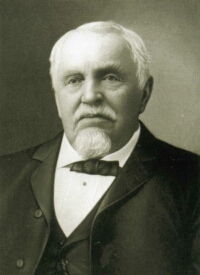 For those who do not come from Kirchheim unter Teck and its surrounding area, the name of Jakob Friedrich Schöllkopf sounds unfamiliar. Who was the man whose name has been adopted by our school and why was he the chosen one?

Jakob Friedrich Schöllkopf was born in Kirchheim in 1819. He was the twelfth out of fifteen children of the tanner Heinrich Schöllkopf and his second wife Christiana Margaretha Mayer. From 1834 to 1841, he learned his father’s profession in the family business and extended his skills through work experience. Around 1841/42, he emigrated to the USA at the age of 21. Before he moved to Buffalo at Lake Erie in 1844, he had been working for two years in New York as a tanner. In Buffalo, he founded a leather shop.

Schöllkopf’s success was profited by favourable conditions. The permanent flow of immigrants reaching America, the Westward Movement but also the Civil War and the successful reconstruction ensured a constant demand for cheap clothing, as well as leather and grain for the military. In addition, he was occasionally supported by his wealthy parents.
He also worked successfully in other industries outside the leather industry, in the mill business, for example, and in power generation. At that time, his hydropower at the Niagara Falls temporarily supplied half of the State of New York with electricity. Thus, he gained the reputation of an outstanding, American pioneer in science and was regarded as „one of the greatest workers and one of the builders of America“.

Although his enterprise had become such a success in the USA, Mr Schöllkopf never forgot his hometown Kirchheim unter Teck. A street is named after him (“Schöllkopfstraße”) and, of course, the Jakob-Friedrich-Schöllkopf school, remind the citizens of Schöllkopf and his credits and support. On 15 September 1899, Schöllkopf died in his new home in Buffalo.